I recently completed a course that used R for various statistical and machine learning methods. In a separate article I have discussed the course and my semester project, Text Sentiment Analysis with R. Another is coming soon with R Markdown tips and tricks I learned along the way. But first some background is in order…

A Case for Reproducible Workflows

In this article I’ll provide a simple introduction to the R Markdown for the uninitiated. I consider this approach, a form of single source publishing, a vital component of reproducible computational research, and an essential skill. The following short video dramatization of real-life events provides a motivating example that we can all relate to… (Link opens in YouTube) 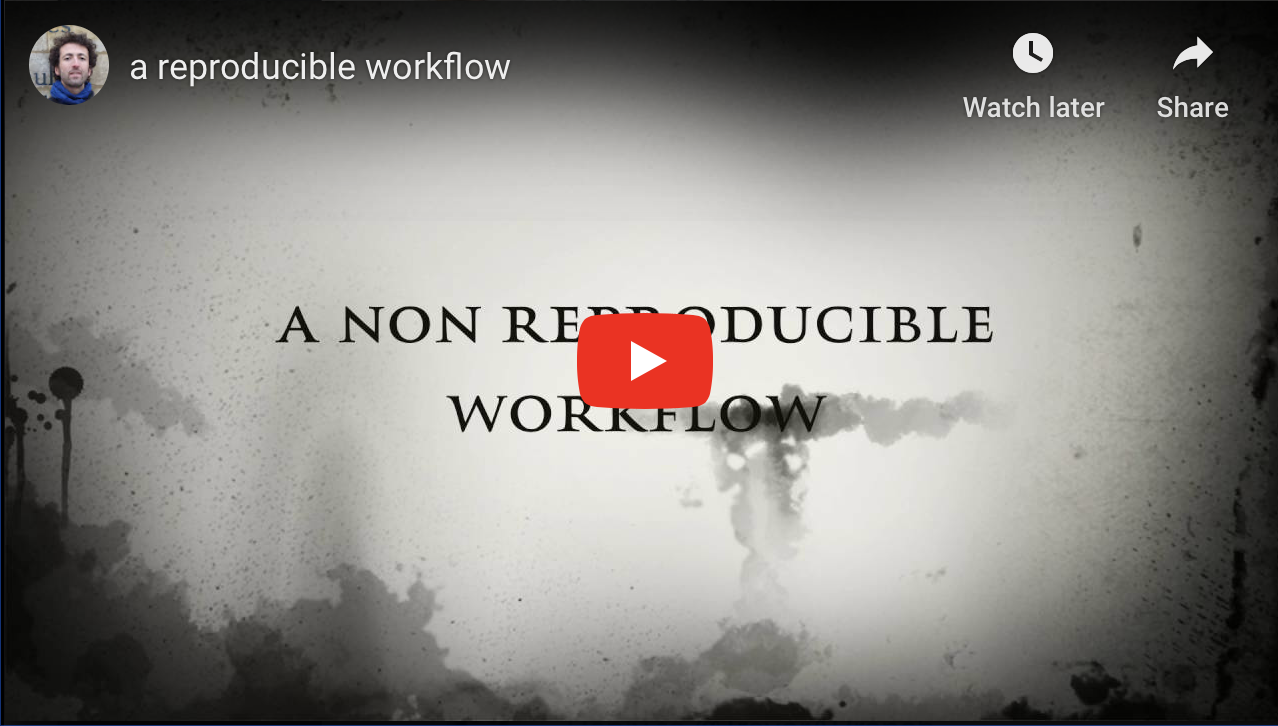 The video ends with the glimpse of a better future, a hopeful vision of reproducible workflows powered by source control (git) and R Markdown. It is within reach! The tools are built into RStudio and the essentials are easy to grasp and apply. The short time it takes to begin using this method will pay generous dividends ever after.

As this post grew and grew, I felt like the initial promise of a solution “within reach” seemed less and less credible. Perhaps after writing and digesting this I will be able to return to the topic and create the TL;DR version…

What is R Markdown?

R Markdown was introduced in 2012 by Yihui Xie, who has authored many of the most important packages in this space, including {knitr}. In his book, R Markdown: The Definitive Guide, Xie describes R Markdown as “an authoring framework for data science,” in which a single .Rmd file is used to “save and execute code, and generate high quality reports” automatically. A very wide range of document types and formats are supported, including documents and presentations in HTML, PDF, Word, Markdown, Powerpoint, LaTeX, and more. Homework assignments, journal articles, full-length books, formal reports, presentations, web pages, and interactive dashboards are just some of the possibilities he describes, with examples of each. To say it is a flexible and dynamic ecosystem is an understatement.

Anyone that has worked with R Markdown’s Python equivalent, Jupyter Notebooks, will find the following familiar. You may also be interested in my article Exploring Jupyter Notebook-Based Research.

R Markdown also allows users to embed code expressions in the prose by enclosing them in single backticks.

A minimal .Rmd example is included below. This is based on the Xie’s sample, which I’ve modified to demonstrate all of the elements mentioned above.

Let’s take a moment to walk through this, line by line.

Rendering this code to an HTML file via the Knit button results in the following: 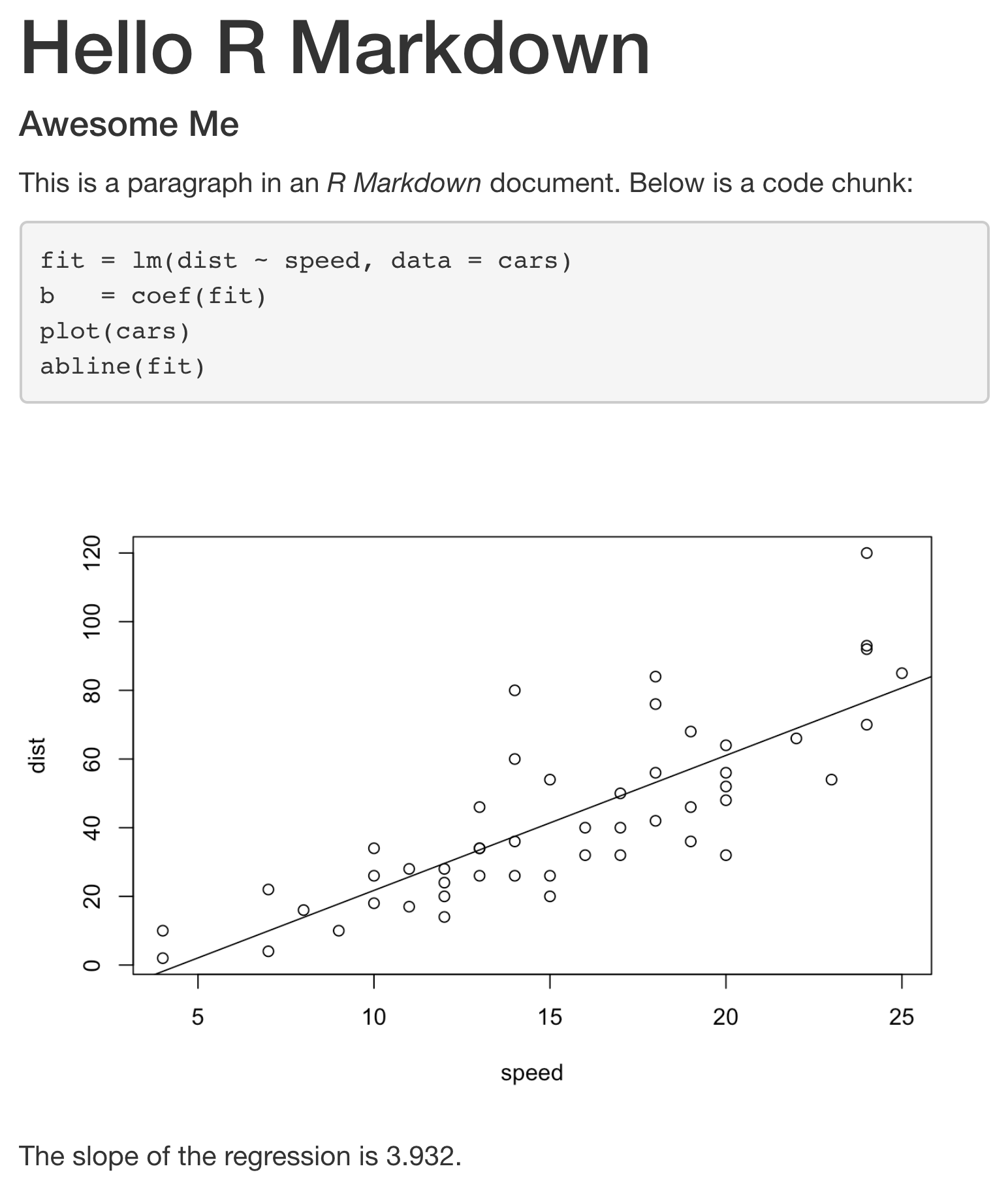 In RStudio, .Rmd files can be created from the File menu, by selecting New File... and then R Notebook. A template .Rmd will be opened, containing a YAML header, some body text, and a few code chunks to get you started.

Add chunks either by typing the backtick and curly brace syntax directly, using Insert on the editor toolbar, or with the keyboard shortcut Cmd/Ctrl + Alt + I. Pro-tip: this can also be used to

The difference between an .Rmd file and an R Notebook is subtle but important. In the context of RStudio, R Notebooks should be thought of as a particular interface for .Rmd files. This interface is triggered whenever html_notebook is the default (first or only) output specified, which is the case for any newly created R Notebook.

Note the important distinction between the output types html_notebook, which enables the R Notebook Preview features, and html_document, which specifies a Knit output target.

In short, create a new R Notebook, click Preview, make changes to the Notebook, save the changes, and violà! Finish your work, using the automatic Previews to guide your edits. Then Knit to the desired final format(s) using the drop down list on the Preview button. 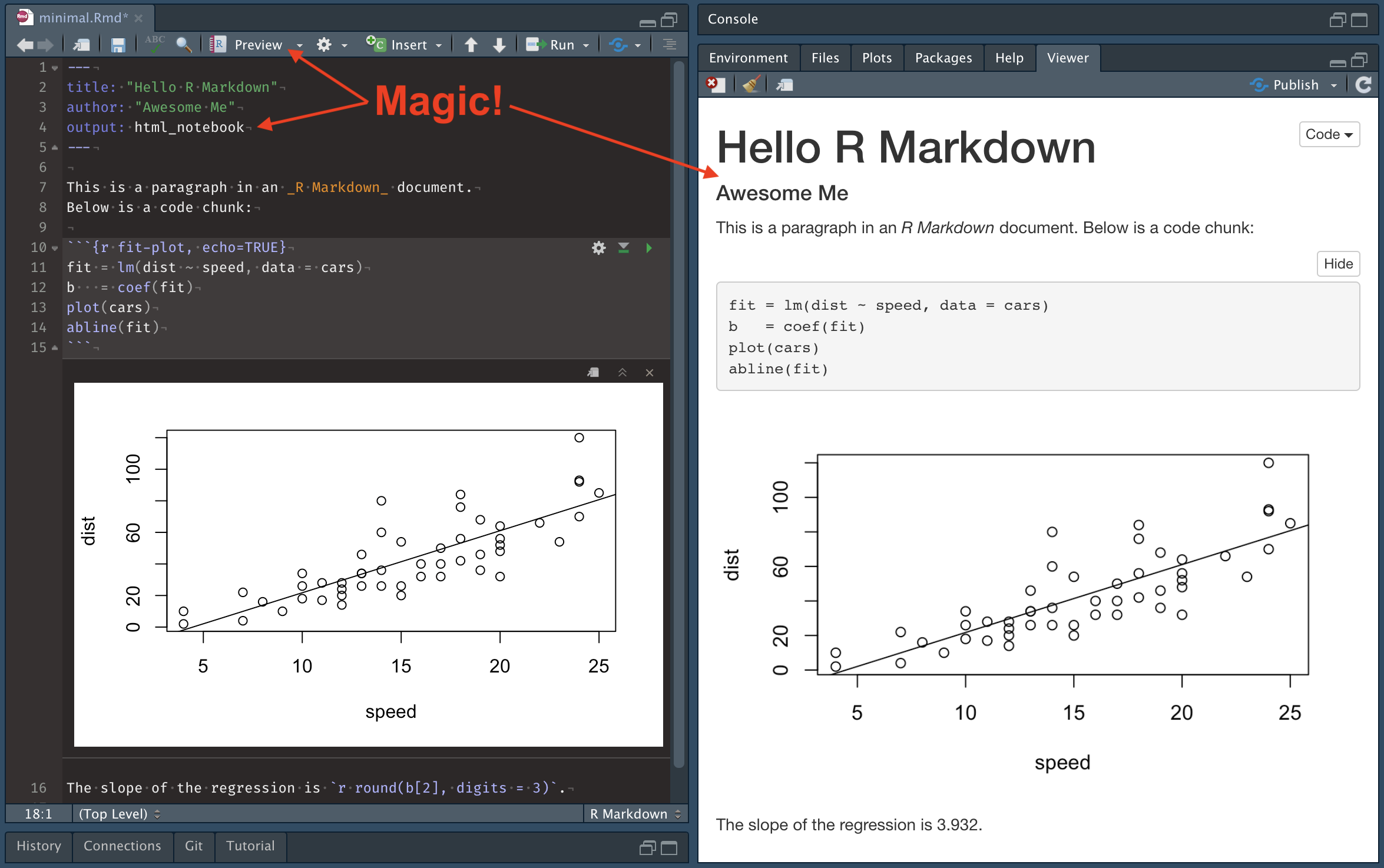 This is a huge time-saver. When Knit is used to render final output the entire Notebook is run from scratch. Depending on its contents this can take a while, but even simple Notebooks take several seconds to process. By contrast, the Preview HTML is generated incrementally, as each change is made, and updated instantly with each save.

The result is not usually a true WYSIWYG experience due to differences between the way HTML and your final output format is rendered (e.g., HTML doesn’t have page breaks), but saves countless round-trips through the Knit-check-edit process. An added benefit of this approach is accelerated learning, greater willingness to experiment, etc., all engendered by the reduced friction that comes with near-instantaneous feedback.

Clicking the Knit button kicks off the following process:

In a nutshell, R Markdown stands on the shoulders of knitr and Pandoc. The former executes the computer code embedded in Markdown, and converts R Markdown to Markdown. The latter renders Markdown to the output format you want (such as PDF, HTML, Word, and so on). - Xie, Preface

Under the hood, RStudio calls the function rmarkdown::render() to render the document in a new R session. Please note the emphasis here, which often confuses R Markdown users. Rendering an Rmd document in a new R session means that none of the objects in your current R session (e.g., those you created in your R console) are available to that session. - Xie, Compile an R Markdown document

In other words your .Rmd must run start to finish, without errors, from a clean environment. If, for example, the code relies on variables created or packages loaded via the console during your interactive session, the Knit will fail. This requirement goes a long way to ensuring that others, given the same file, will get the same results. For more details, follow the link in the quote above.

To confirm that your .Rmd runs cleanly, perform the following steps:

As an alternative to the first step you can include rm(list=ls()) at the top of your code. I believe this achieves an equivalent result, removing all objects in the current workspace. With that addition, simply use Restart R and Run All Chunks to reinitialize the R kernel and run your code, which will automatically clear the environment.

Finally, if Knit or Run All Chunks is failing in a way you don’t understand, step through the code. After clearing the workspace choose Restart R and Clear Output in the Session menu. Now use the methods described in [Running Files], above, to run each chunk until you find the problem. To isolate issues within a problematic chunk, break it into multiple chunks and/or run it line by line.

Any missing dependencies that would halt the Knit process should be identified by these methods.

It’s (way past?) time to draw this to a close. I hope that it has given you a grasp, or at least a taste, of:

If you learned half as much reading this as I learned creating it then we’re both doing well!

You could write a book about this. In fact, people have. Several…

This article relied heavily on Yihui Xie’s R Markdown: The Definitive Guide, specific sections of which have been linked throughout. In addition, it is hard to go wrong with any of his books, most of which are available online for free, and in print:

You might also check out Hadley Wickham and Garrett Grolemund’s classic, R for Data Science, especially the last section, Communicate, chapters 26 through 30.

Finally, I found this wayward web page had some good tidbits.